The Marine Park is located just north from Tekek, the capital of Tioman Island, Malaysia. The dive site is named because it is near the Marine Park Authority’s island centre. It is just off the shore and is divided into two distinct areas. 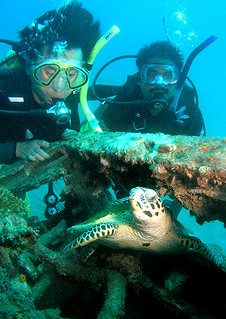 This is a collection of sunken illegal fishing boats. I have never counted them but there are a lot of them, maybe ten or more. They have not managed to attract the abundance of marine life that wrecks usually do. I an not at all sure why not, because all the other wooden boats sunk in this area have. They were sunk in a quiet and sheltered area of the bay so I would have expected them to be better colonised. I guess it is just one of those things, but I have seen turtles and a variety of Nudibranch here. Curious batfish are another regular sighting here and sometimes follow divers from wreck to wreck.

The wrecks start at about 15 meters and are spread out over a large area which has a featureless sandy bottom. They are linked together by ropes so navigation is not a problem, but because there are so many of them it is easy to get disorientated and loose track of your direction. Take a compass!

They have been there for some time now so are largely collapsed, but many features are still visible. 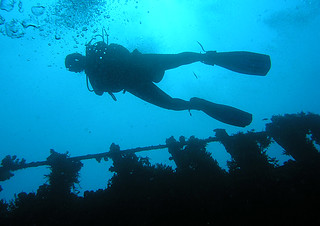 As with other jetties world wide, this one attracts a good variety of marine life. Soft corals, barnacles and the like encrust the underwater concrete structure, while some discarded concrete garden furniture provide unusual shelter for all manner of juveniles and smaller marine creatures. Snappers, cardinals, and anchovies and silversides are among the schooling fish that shelter here. Sand gobies and there attendant shrimps are here in abundance, but so are the sea urchins so a little care is called for.