Sepoi Island is one of the most distant dive sites that is regularly visited from Salang Bay on Tioman Island. 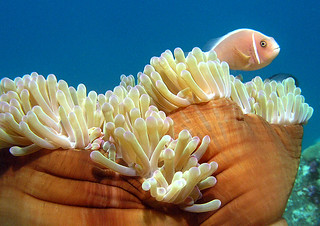 We normally descend close to the island where the bottom slopes gently away to 25 meters plus. Underwater the island is covered in small and medium sized boulders. Coral cover is good consisting mainly of hard corals but with a good selection of soft corals growing on the boulders. In between there are sandy patches, sea whips and a variety of smaller Gorgonian fans.

The selection of fish life is also good. Blue spotted rays search among the sand beds and under the overhangs for prey, while the outer waters are patrolled by oceanic barracuda searching for opportune moments. Batfish, forever curious about divers follow any groups, while shoals of antheas always provide a welcome display.

Angelfish are another species commonly spotted in Tioman waters, but at Sepoi Island I have seen not only the more common Blue Ringed and Five Striped angelfish, but the much more rare Emperor angelfish. 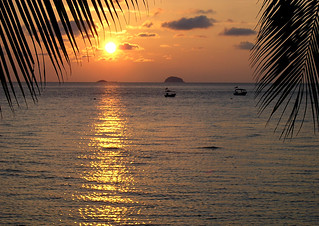 Sepoi became famous one year, or should I say infamous, after one of the small liveaboards that visit these waters managed to run aground there. The skipper had managed to fall asleep while maneuvering close in. Nobody was physically hurt and there was very little long term damage to the reef. While the boat and most of its contents were quickly recovered, it did provide an unusual and therefore interesting dive observing the various bits and pieces that had been lost.

It also provided a good deal of amusement among the diving community, although I doubt that was the case with the poor customers.