Rengis island is one of the best sites in our area. Lying a few hundred meters from the coast of Tioman Island, Malaysia, it gives the most common sightings of black tip reef sharks off Tioman Island. For those of you with anxiety about sharks, rest assured that humans are much too big to be prey to these wonderful creatures.

The island itself is surrounded by an extensive stag horn coral garden which spreads out over a considerable distance to the south and west. It contains a fantastic collection of marine creatures ranging in size from turtles down to shoals of antheas and Nudibranch. Oceanic barracuda are frequently found, and there is a resident shoal of batfish that are very curious about divers! There is also a good selection of clown and butterfly fish, and it is common to spot cuttlefish here.

Someone has set up a three dimensional grid of scaffold poles on the sand next to the reef about half way down the west flank. While this is not the most beautiful of objects, it is great fun to practice buoyancy skills there and will over a period of time encourage coral growth. 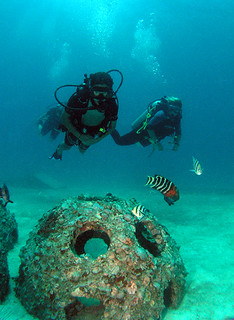 About ten years ago the Sultan of Pahang, one of the states that makes up the nation of Malaysia, organised the construction of an artificial reef to the north of Rengis Island. It is made up of hollow concrete balls and includes solid blocks that have a metal plaque attached. On these plates he had the name of all the dive professionals who were working on the island at that time engraved!

The balls were placed some distance from the reef. This has made the coral propagation slow, but reduces the amount of disruption caused by frequent diving. Time will tell how this will work out. However, the Sultan is to be congratulated for his forward thinking and his efforts on behalf of this environment.