The middle of the month was a time of delightful coincidence. Two separate young couples independently booked the same course, PADI’s Open Water, on exactly the same schedule. But that was not the only coincidence – it turned out that all four of these guys were newly qualified doctors! 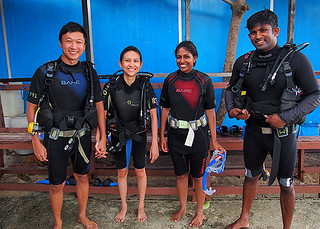 Two of them had already begun their houseman internship while the other two were temporarily unemployed while waiting for their posting to come through. But that wasn’t the last coincidence – both couples had checked out my Trip Advisor postings and both said that what they had read there was a big factor in why they had chosen me to be their instructor!

However Kee and Ken, and Seetha and Dineth were learning to dive in challenging sea conditions. The strong surge and poor visibility added to their difficulties and reduced the fun that most of my students have.

Diving is a sensory experience and sight is the primary sense involved. The colourful and abundant marine life of Salang Bay normally excite and astound visitors and act as a kind of ‘reward’ to students for all their efforts. To see and get close to this environment is why most people learn to dive. 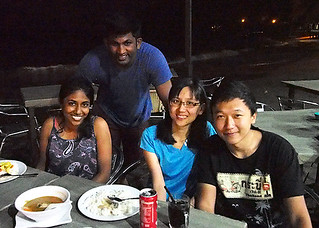 These students were unlucky in that I couldn’t take them too close to the reef for fear of injury and damage, and because the visibility was poor that meant that they didn’t get to see the best that Tioman has to offer.

They were not deterred by this and all four were determined to successfully complete the course. The most impressive aspect of their learning for me was their reaction to my feedback. When I made suggestions or gave them tips all four of these individuals took them on board and applied them on their next visit to the water.

All four of them are interested in returning for their Advanced Course, so that is something for us all to look forward too! WAY TO GO GUYS!! 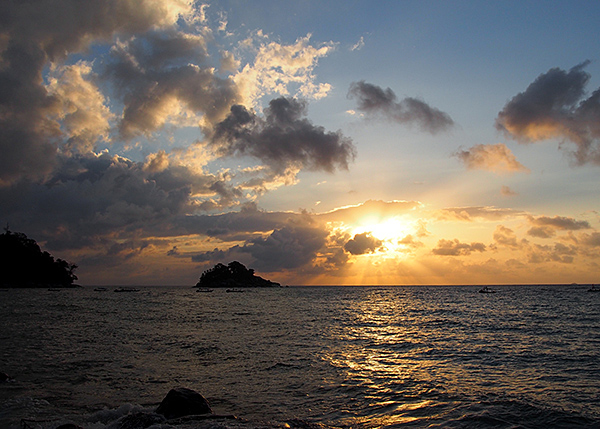 On my way to join the guys for dinner!