Nitrox-Enriched Air – What is it, and what does it do?

Nitrox or Enriched Air as it is sometimes called is a mystery to most Open Water Divers. So allow me to shed a little light on the matter. To put this as simply as possible, the air that we breathe on the surface and from a normal diving cylinder is approximately 21% oxygen and 79% nitrogen. Nitrox has had an extra percentage of oxygen added to the air, in other words it has been enriched with more oxygen.

As far as I know Nitrox was first used by the British Royal Navy from 1944 onward. Their research was kept secret and the civilian diving community had to cover similar research in the 1960. Since there was reluctance to use Nitrox within the recreational dive training agencies at that time, I presume its application was for commercial diving.

As time went on, and the scientific evidence of its safe use built up there was a growing trend towards its use recreationally. PADI approved its use and developed their own Nitrox course in the mid-1990s. It has since gone on to prove their most popular specialty dive course.

If you want to learn more about PADI’s Nitrox course, check it out the link:

The cylinders used for Nitrox mixes must be marked in a clear and specific way to avoid them being used as normal air cylinders.

The typical percentages used in recreational diving are either 33% or 36%.

What this means for the diver is that if he is using Nitrox he can stay down longer but he cannot go so deep. The higher the percentage of oxygen the longer he can stay at a given depth, but his maximum depth gets reduced in proportion.

So let’s have a look at this in more detail so that I can explain what is going on here.

The maximum depth for a suitably trained and experienced recreational diver is forty meters. The amount of time he can spend there is governed by the no decompression limit. This limit is set by the diver’s exposure to nitrogen. The more air we breathe, and the denser that air is, the more nitrogen the diver absorbs. 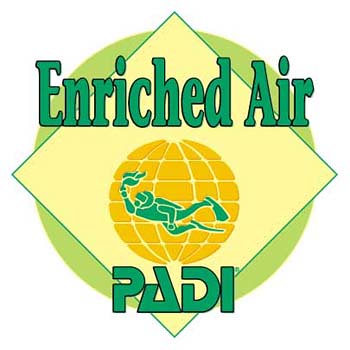 So by using enriched air we reduce our exposure to nitrogen and therefore increase our no decompression limit. That is the plus side.

The negative aspect is that we are increasing our exposure to oxygen. Oxygen at pressure becomes toxic. Oxygen toxicity can cause the victim to pass out, and obviously this is a very dangerous scenario for a diver. And it is the increased exposure to oxygen at depth/pressure, which results in a limited maximum depth when diving with Nitrox when compared to diving with air.

So how does all this work in practice? According to the Diving Science and Technology Corporation tables, if you plan your first dive of the day to 22 meters , on air your no decompression limit is 37 minutes, on 32% Nitrox it is 60 minutes, and on 36% Nitrox it is a massive 70 minutes! So the gains of using Nitrox are clearly understandable. 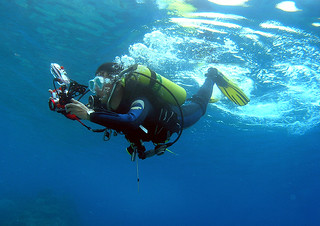 Hiro using Nitrox plus his Olympus

However, now two more factors come into play. Firstly, divers rarely make ‘flat bottomed dives”. In all honesty, I cannot imagine diving to 22 meters and staying there for 70 minutes. Divers usually make multi-level dives – in other words having spent 10 or 15 minutes exploring whatever it is as 22 meters they would normally move on to explore further at reduced depths. The second factor is air consumption. While Nitrox increases your no decompression limit, it does not reduce how much gas you breathe. So to get the benefits of Nitrox you also need to have relatively low air consumption.

To my mind the benefits of using Nitrox really kick in when I am doing two or three dives a day. If your first dive takes you close to your no decompression limit, and your second dive is going to be below say 20 meters or so you will have a relatively short no decompression limit with air. This accumulation of nitrogen exposure builds up over the course of a day’s diving and can limit you fun.

If you do the same dives and have the same surface intervals, but use Nitrox instead you will get much more time at your chosen depths. The benefits of this really start to kick in on second or subsequent dives.

There are three more issues that should be briefly mentioned at this point. Some divers find that by using Nitrox they feel less tired after a dive. Obviously this is subjective and so difficult to quantify and prove scientifically. I have not noticed this effect, but that does not mean that it is not true. The second point is that there are some who feel that as divers get older they should consider using Nitrox more often. While this makes sense, I am getting older, and I only use Nitrox when I am teaching it, yet I still feel safe diving. The third and indisputable point is that by completing the PADI Nitrox course you open the door the world of technical diving.

I will be writing more about the different categories of diving in a post soon to come. Get wet soon!