Next up at the end of March came a group of seven Open Water students – Isamar, Lina, Prateek, Julia, Nicholas, Astha, and James. Incredibly they all work in the same office!

They had allowed four days but because of the ferry schedule it in fact became three. I tried my best to get them to allow another day and they agreed with me. Unfortunately their boss didn’t see it that way. In fact I gather he was not a happy bunny about having an all but empty office for just one day and there was no way he was going to allow these guys any more time off for group activities. 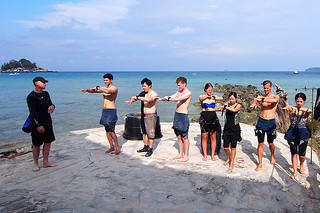 Learning to use a compass.

So I got in touch with my good friend and fellow PADI instructor Jon Grevich who lives in KL and I invited him to give me some help with these guys. It was the best thing I could do to ensure that they all had the best chance of completing the course within their limited schedule.

By a happy coincidence Jon and his wife Cindy had planned a visit to Salang for some fun diving so he was happy to come down a few days early and lend a hand. I was very grateful for the help, particularly on the last day when strong currents and poor visibility made conditions tough for both students and instructors.

A last minute addition to the group came in the form of Mark Soerensen. He was not from the same company and he didn’t have the same scheduling problems. I explained what I had already booked and he didn’t mind that he would be part of a bigger group. He was also quite happy to follow the group schedule because it meant he would be able to take his Advanced course on the same trip.

Only one student dropped out of the course, and it came as a bit of a surprise to me. She had been in Jon’s group for most of the time, but I had her in my group for the mask skills in confined water session two. She had mastered these skills without too much difficulty so I had been confident that she would complete.

But she didn’t have the same level of commitment as the other guys, so she opted to spend her time relaxing and enjoying the laid back atmosphere of Salang. She was sure of her decision, so I had to respect that. I guess that she wasn’t ready to make the transformation to become a diver at that point in time.

The rest of the group went on to finish it all and after we all had a celebratory dinner together, Mark and I continued onto his Advanced course. Good luck guys – and I hope to see you all again before too long! 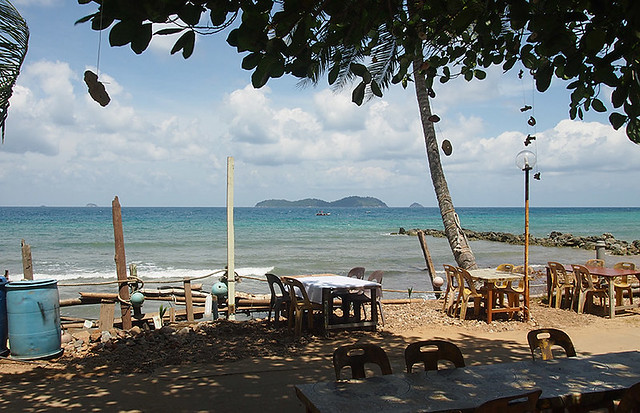