Magicians Rock is a sunken offshore reef lying about half way in between Tioman Island and Coral Island. It is a huge structure, impossible to cover in one dive. The currents can be strong and it is a focal point for local fishermen. 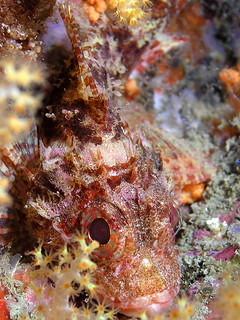 It became famous after a visiting travel writer was lucky enough to spot a manta ray there. Mantas do come to Tioman waters, but they are rarely sighted.

It is a wonderful dive site packed with a god stock of marine life and a variety of coral formations. Jacks, barracudas, moray eels, groupers, blue spotted sting rays, Rainbow Runners and scorpion fish are among the larger inhabitants, while Nudibranch, antheas, and a variety of clown fish, cover the smaller stuff. Add in a selection of butterfly, wrasse and parrot fish to get the full measure! 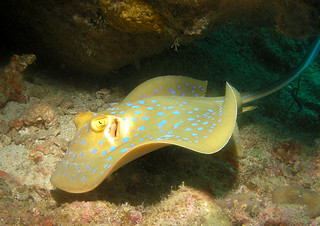 We normally begin the dive at the mooring buoy, if it has survived the onslaught of the monsoon and use by fishing boats. This leads down to a bommie at about 10 ,meters deep. From there the options are almost endless and how I conduct the dive depends on the current. Since this reef is so far from land it is particularly vulnerable to tidal movements, but on the plus side it is never affected by rain run off. Being so isolated it is rarely dived, so these two factors mean that the reef is in exceptional condition, and the fish population is only under threat by fishermen. This all means that Magicians Rock is as close to pristine as Tioman Island can offer.

Because of its location and the currents it is rare that I conduct courses there, but on the other hand there is no good reason not too. However,it is really best dived by experienced and confident divers as a fun dive.