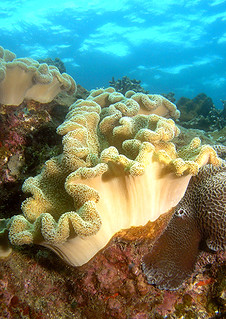 Kadoh Bay lies to the north of Fan Canyon. While this site is not as dramatic as some of the other Coral Island dive sites, it is none the less a smashing place for both fun divers and students.

It is less frequently visited than its more spectacular neighbours, so it is not under the same pressures as some of the more popular dives.

Full of curious and unusual coral formations it stretches from 2 meters down to about 16 and fills this medium sized bay with predominantly hard corals.

Moray eels, blue spotted sting rays, turtles and bump heads can be seen, while on a recent dive here I found lots of nudibranchs indulging in what comes naturally! A few years back I found a large boulder to the north of the bay literally covered in Christmas Tree worms of all colours and sizes – it was absolutely spectacular and I have never before or since seen anything like it. 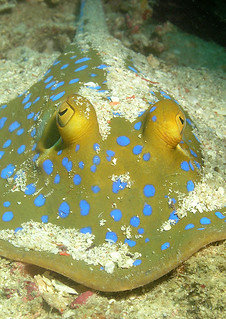 It is also a good place to spot butterfly fish. The waters of Tioman Island, and Kadoh Bay in particular, are blessed with a good range of this family of beautiful fish. From the ubiquitous Beaked butterfly fish, to the Tail Spot butterfly fish, and on to the less commonly seen Banner fish, these colourful critters are a delight to see. They usually live in pairs, but can present a real challenge to a photographers stalking skills and patience. While they are not exactly shy, they are very particular about what is in their immediate area, and as with many species are quite happy to ignore a diver until he raises a camera to capture an image.

Being a relatively shallow dive site it is ideal for a second or third dive of the day, or for people who feel a bit intimidated by going deep. But for me personally, I love to pair it up with a first dive to Fan Canyon and then travel just a few hundred meters to Kadoh – the contrast is spectacular and visitors are often surprised by the difference in the environment in such a short distance.

Being shallow and sheltered it is a particular favourite of mine for both Open Water students and photographers.