How Diving Effects Your Health and Circulatory System 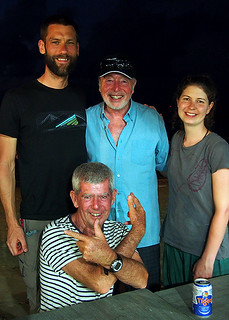 In this article, we explore how the various aspects of diving effects your heart and cardiovascular system.

I found the article to be an interesting read, so I thought I would share it here on my blog. G.M.

Scuba diving exposes you to many effects, including immersion, cold, hyperbaric gases, elevated breathing pressure, exercise and stress, as well as a post dive risk of gas bubbles circulating in your blood. Your heart’s capacity to support an elevated blood output decreases with age and with disease. Having a healthy heart is of the utmost importance to your safety while scuba diving as well as to your ability to exercise generally and your life span. 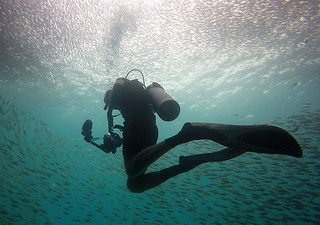 Immersion in water near the temperature of the human body exposes your body to a pressure gradient, which shifts blood from the vessels in your legs to those in your chest cavity. This increases the volume of blood within your chest by up to 24 ounces (700 milliliters).

Your heart thus takes in an additional 6 to 8 ounces (180 to 240 milliliters) of blood, resulting in an enlargement of all four chambers, an increase in pressure in your right atrium, a more than 30-percent increase in cardiac output and a slight increase in your overall blood pressure.

Baroreceptors (sensors that perceive a change in blood pressure) within your body’s major vessels react to all these changes by decreasing the activity of your sympathetic nervous system, which governs what’s popularly called the “fight-or-flight” response. As a result, your heart rate declines and the concentration in your plasma of norepinephrine, a hormone of the sympathetic nervous system drops; in response to the drop in norepinephrine, your kidneys excrete more sodium, and your urine production increases.

Water has high thermal conductivity — that is, your body loses more heat when you’re immersed in water than when you’re in dry air. You’ll feel more comfortable at a given air temperature than when you’re immersed in water of the same temperature. And when your body loses heat, which intensifies the narrowing of your peripheral blood vessels (a condition known as “peripheral vasoconstriction”). This in turn sends more blood to your heart, which increases the filling pressure on the right side of your heart and makes it pump more blood. Constriction of the body’s small arteries also increases the resistance to blood flowing through the periphery of your body, which raises your blood pressure, meaning your heart has to exert itself more to maintain an adequate flow of blood throughout your body. 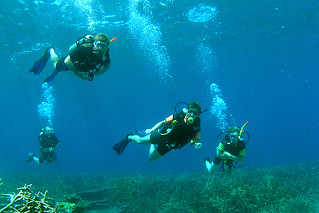 Breathing air under increased pressure, as you do when scuba diving, also affects your heart and circulatory system. Increased levels of oxygen cause vasoconstriction, increase your blood pressure and reduce your heart rate and heart output. And increased levels of carbon dioxide — which may accumulate in the body when you exercise during a dive, due to reduced pulmonary ventilation caused by dense gases — can increase the flow of blood through your brain, which can speed up oxygen toxicity if you’re breathing a hyperoxic gas mix (one with an elevated level of oxygen). 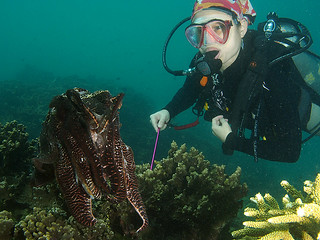 Diving can be very physically demanding, but recreational divers have the option of choosing diving conditions and activities that typically do not require a lot of exertion. Nevertheless, any dive places some metabolic energy demands on your body. For example, slow, leisurely swimming on the surface represents a moderate-intensity activity, while swimming with fins on the surface requires up to 40 percent less energy than barefoot swimming. But the addition of scuba equipment increases drag on the swimmer and thus the energy cost of swimming. A 1996 paper in the journal Medicine & Science in Sports & Exercise showed that wearing just one scuba tank may increase a diver’s energy consumption by 25 percent over regular surface swimming at the same speed and that using a drysuit may result in another 25 percent increase in energy consumption.

Most dives at neutral buoyancy and with no current require only short intervals of intermittent swimming at a slow pace and thus represent low- to moderate-intensity exercise. Exercise intensity is measured by a value known as metabolic equivalent (MET), with 1 MET representing the amount of energy consumed when at rest. It is suggested that divers be able to sustain exercise at 6 METs for a period of 20 to 30 minutes. Since people can sustain only about 50 percent of their peak exercise capacity for a protracted period, it is recommended that divers be able to pass an exercise stress test at 12 METs. 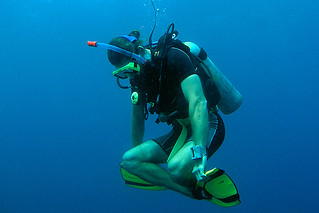 Most of the effects that diving has on your heart and circulatory system fall within your body’s capacity to adapt, but sometimes serious adverse reactions can occur. A reaction known as bradyarrhythmia (a very slow and irregular heartbeat) can cause sudden death upon a diver’s entry into the water, especially in individuals with a pre-existing rhythm anomaly. Conversely, tachyarrhythmia (a very rapid and irregular heartbeat) can also cause sudden death, especially in divers with structural or ischemic heart disease. And overexertion or the effects of stress may strain the heart and result in acute manifestations of previously undiagnosed ischemic heart disease.

Breath-hold diving can have particularly serious adverse cardiac effects; these effects occur in quick succession in a response known as the “diving reflex.” Its most significant elements include bradycardia (a slowing of the heart rate); the peripheral vasoconstriction reaction described above; and progressive hypoxia (or lack of an adequate supply of oxygen). To avoid bursting a lung, scuba divers must not hold their breath during ascent.