Golden Reef and Tiger Reef are two of the gems of Tioman dive sites. Both are submerged offshore reefs and start at about 10 meters deep. Tiger’s bottom lies at about 25 to 30 meters while Golden’s is a bit shallower at 20 to 25. The coral cover is great at both sites, though possibly a little more dense at Tiger. I could happily dive both sites every day, but if I had to choose one it would be Tiger.

I had an intimate and prolonged encounter with an immature whale shark here, and whale sharks are rare in Tioman waters. It approached the boat and nudged it as if he or she was curious and had never been this close to one before. We snorkeled with it for a while, then changed to scuba for about ten minutes before beginning our dive. 50 minutes later it was still in the area and we spotted it on our safety stop. Amazing! 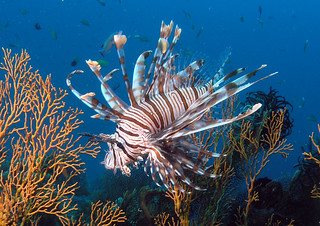 On another dive here we watched as a large shoal of Golden Trevally repeatedly raced around the reef hunting for prey. There used to be a resident turtle with a chunk of his front fin missing, but seemed to be living comfortably enough with his injury.

The dive begins with an easy and large swim through. This leads into a magnificent coral garden densely packed with Gorgonian fans, barrel sponges, and a good variety of both mid sized and small creatures. There are boulders large, small and gigantic littering the sandy bottom, all covered densely by marine growth.

If the currents are not too strong this site is suitable for all levels of diver skills, but it a must see site for photographers. 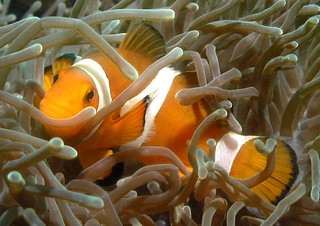 Golden Reef and Tiger Reef are separated by a 100 meter gap, and both lie in between Labas and Sepoi islands. The boulders at Golden are slightly smaller that at Tiger, but still covered by dense coral growth. There are some large table corals, stag horn and brain corals and the sandy bottom edges are home to sea whips. It was in this area that a friend of mine got a great photo of a guitar shark resting on the bottom.

This reef is home to snappers, batfish, barracuda, lion fish and a nice variety of puffer fish. Nudibranch and crustaceans can be found.

There are some easy swim throughs, and being more shallow allows for longer bottom times. Again, this site is suitable for all levels of divers and is a magnet for photographers.